The slow-paced investigative story told the lives of four retired police officers with the titular character Joseph as the lead.

Joseph was commercial success and ran for 125 days in theatres. The role had fetched Joju a Kerala State Award for Best Character Actor and also won Special Mention in the National Awards. Joseph Streaming on Prime Video.

The movie was set to be remade in several languages following its commercial and critical success. The film is being remade in Tamil as Visithiran starring R. K. Suresh, then in Telugu as Sekhar starring Rajasekhar, a Hindi remake is also being made with Sunny Deol in the lead. 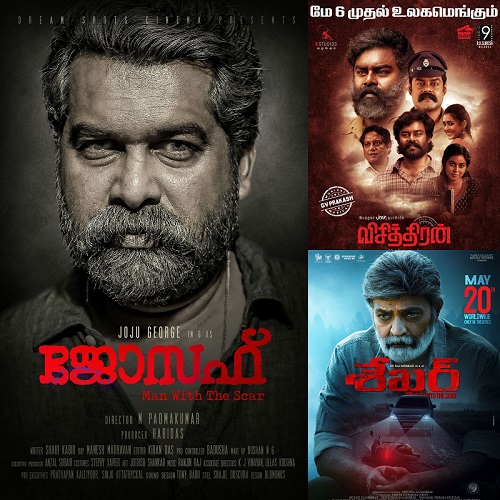 Popular producer and actor R K Suresh next film Visithiran. The Tamil remake rights of Joseph was bagged by the renowned director Bala, who opted to bankroll the remake under his banner. RK Suresh reprising the role of Joju George. John Mahendran was roped in to pen the dialogues while M Padmakumar, who directed the original version, is directing the remake too.

GV Prakash Kumar has scored the music for 'Visithiran', cinematography by Vetrivel Mahendran.

Visithiran also stars Poorna and Madhu Shalini reprising the roles of Athmiya Rajan and Madhuri Braganza from the original.

Suresh increased his weight by 22 kilos and later had to shed weight for his young appearance. Moreover he had to give three different voices in the dubbing for the film.

Visithiran is slated to hit the screens on May 6th

Veteran Tollywood actor Rajasekhar's forthcoming film Shekar. His eldest daughter Shivani Rajasekhar has been roped in a crucial role. The father-daughter duo is replicating their real-life relationship in the crime thriller directed by Jeevitha Rajasekhar. This is for the first time that Rajasekhar has collaborated with his daughter and wife in a movie.

It is a remake film but the makers have made some changes to suit the Telugu audience sensibilities.

Shivani made her Tollywood debut in 2021 with the movie Adbhutam which streamed on Disney+Hotstar.

Shekar theatrical release on May 20th

Sunny Deol will reprise the role of Joju as a retired quick-witted police officer. The film will be directed by M Padmakumar, who helmed the original one too, and will be produced by Kamal Mukut.

The actor took to Instagram to share his look for the film that has been titled Soorya. The crew of the film currently filming in Jaipur. The plot of the film remains the same, the narrative has been tweaked a bit to appeal to the Hindi-speaking audience.