Bollywood Actor Kartik Aaryan starrer Bhool Bhulaiyaa 2 released in cinemas on May 20, 2022. The horror comedy film directed by Anees Bazmee had been faring very well at the box office. The film has earned a cumulative total of Rs 109.92 crore within two weeks of its release. 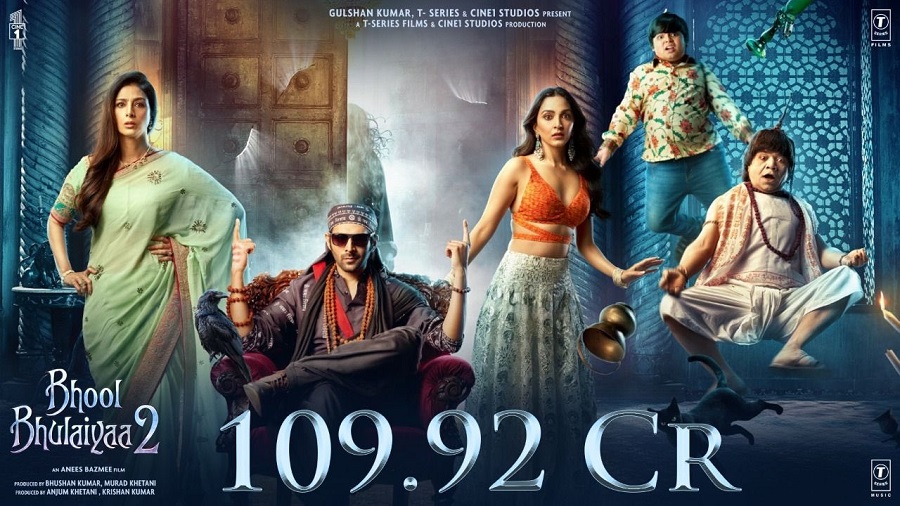 Kartik Aaryan’s Bhool Bhulaiyaa 2 collections surpasses his Sonu Ke Titu Ki Sweety (2018) collections. This is Kartik Aaryan's second film to earn over Rs 100 crore. The film has become the third Hindi movie in 2022 to have crossed the 100 crore mark after Alia Bhatt-starrer Gangubai Kathiawadi and The Kashmir Files.

Bhool Bhulaiyaa 2 is the sequel to Akshay Kumar and Vidya Balan's 2007 psychological horror comedy of the same name, which took in more than 55 crore over the weekend. While Priyadarshan had directed the original, this time Anees Bazmee is in the director’s chair.

Plot: A fraud psychic who is brought in to deal with the return of Manjulika, a malevolent spirit hell-bent on revenge against the Thakur family.

Review: The film is being loved by the audience for its humour, direction, performances, plot, and especially the title track in which Kartik is seen flowing on the ZigZag hook step. Tabu who stole the show once again after AndhaDhun.

Upcoming Projects: Kartik has an interesting lineup of projects that includes Shehzada, Captain India, Freddy and Sajid Nadiadwala's untitled next.