Thurthu Nirgamana Sci-Fi, Fantasy Drama in the Time Loop concept, debutant directed by Hemanth Kumar L. The title of the film means Emergency Exit. Thurthu Nirgamana is all set to release in theaters on June 24, 2022. 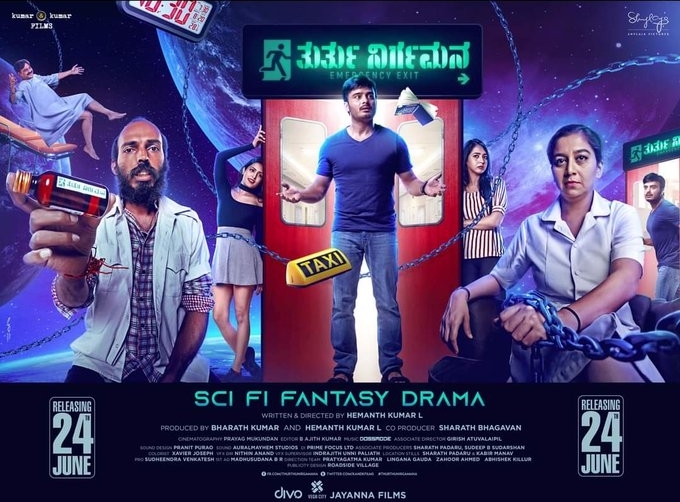 The film which has already raised expectations through its unique promotions is a unique tale. And it’s not just because of its storyline, even the characters in the film are known to be rather different from what you are usually in movies.

The project is being made under the banner Kumar and Kumar Films. The music was composed by Dheerendra Doss 'Dossmode' while cinematography is done by Prayag Mukundan and is edited by B Ajithkumar.

Thurthu Nirganama is based on the story of Vikram, played by Sunil Raoh. Vikram, an aimless man in life, is dead, but he is granted the grace of three days to live again if he decides what he wants to accomplish in life. The concept and screenplay seem to be clearly new to the industry.

Actor and singer Sunil Raoh and Raj B Shetty as part of the ensemble cast that also consists of Sudha Rani, Achyuth Kumar, Hitha Chandrashekar, and Samyuktha Hegde among others. Co-star Raj B Shetty plays the role of a cab driver named Shivu.