What to Watch This Week: From Love Today to Ginna, a list of OTT releases this weekend

Here's a list of films streaming across various OTT platforms December 1st and 2nd that you can watch from the comfort of your homes. 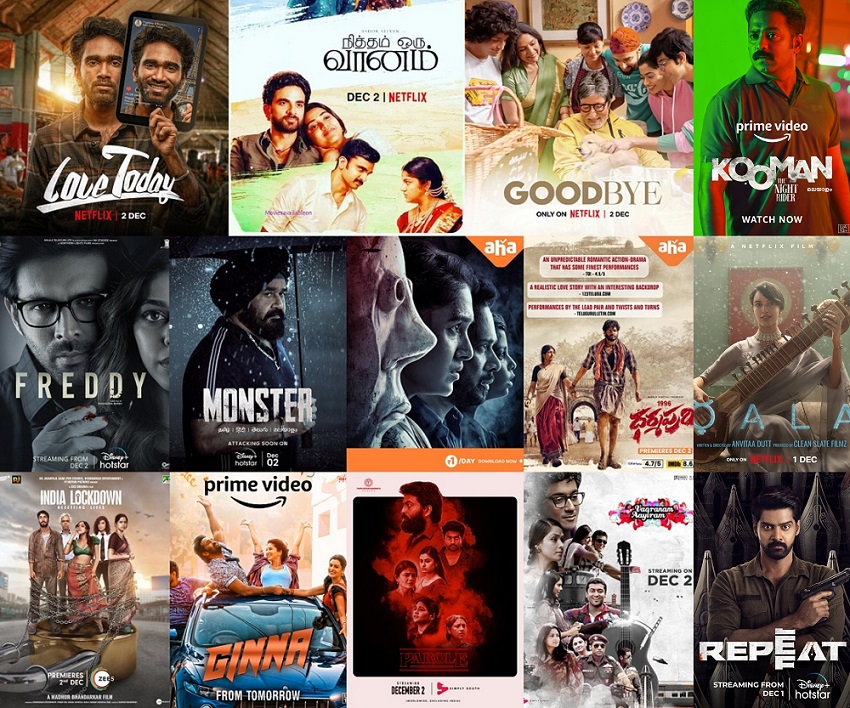 After the blockbuster Comali movie, director Pradeep Ranganathan directed and acted in the "Love Today" rom-com movie. It is an adaptation of his own short film App(a) Lock. A young couple Pradeep and Nikitha, who decide to take their relationship to the next level. When Pradeep meets Nikitha’s dad, he puts forth a strange condition to exchange their phones for a day. And once that happens, fun chaos unfolds. The film reportedly cost only Rs 5 crores to produce, but it made almost Rs 70 crore at the box office.

Mohanlal & Telugu actor Lakshmi Manchu in the lead roles. Like a crime thriller genre, the story is filled with unexpected twists and suspense elements. Mohanlal plays the role of a mysterious man named Lucky Singh in the film. Renowned author Udaykrishna and director Vysakh collaborated on the creation of this movie.

The film is helmed by Plan A Plan B director Shashanka Ghosh and stars Kartik Aaryan and Alaya F in pivotal roles. It centers around the journey of Dr Freddy Ginwala, the lonely and socially awkward guy who goes on to leave you mind blown. With a thrilling set of twists and turns, there is little doubt that the movie is al set to create utmost chaos.

Amitabh Bachchan, Rashmika and Neena Gupta starrer Goodbye family, drama directed by Vikas Bahl of Super 30 fame. Goodbye marks the Bollywood debut of Rashmika. What happened when Tara (Rashmika) and her 3 brothers return to her hometown in Chandigarh for their mother’s creation. The film is a complete family entertainer, containing all elements like love, fights, and arguments, and focusing on a dysfunctional household.

The Ra Karthik directorial, which stars Ashok Selvan, Aparna Balamurali, Ritu Varma, and Shivathmika Rajashekar, was a romantic drama with an interesting premise that revolved around three love stories. The film opened to good feedback from the audience and critics likewise. It faced tough competition at the box office as Love Today too released on the same day.

Based on actual events that occurred in 1996 in Dharmapur, Jagath directed the movie. staring Aparana Devi, Janardhan in lead roles. 1996 Dharmapuri is a rural village drama that revolves around the love story of Gagan Vihaari & Aparna Devi.

Jeethu Joseph’s investigative thriller 'Kooman' starring Asif Ali. The film is all about a strict police officer who relocates to a hilly village on the Kerala-Tamil Nadu border. Few normal incidents that take place suddenly appear to be abnormal.

Naveen Chandra starrer Novel Crime Thriller film Repeat is a remake of the Tamil film Dejavu. Repeat is directed by Arvindh Srinivasan (who had earlier helmed Dejavu), tells the story of a writer who is trapped in a situation where mysterious events keep on happening around him. The film also stars Madhubala, Achyuta Kumar, Smriti Vekat, Mime Gopi and Kali Venkat in lead roles.

The psychological drama set in the musical world of the late 1930s. Directed by Anvitaa Dutt of Bulbbul fame, Qala revolves around a popular singer, who is admired by many because of her ‘mesmirising’ voice. She, however, is not able to enjoy this fame as she is constantly haunted by her past. Late Irrfan Khan's son, Babil Khan, has made his Bollywood debut with Qala.

Tamil language edge-of-the-seat thriller film Miral, directed by debutant director M. Sakthivel. Starring Bharath, Vani Bhojan and K. S. Ravikumar in lead roles. The movie has likewise received lukewarm reviews from audiences and critics. A family with a past and trauma encounters a series of strange incidences on their way home. Can they survive? What is really behind all of this?