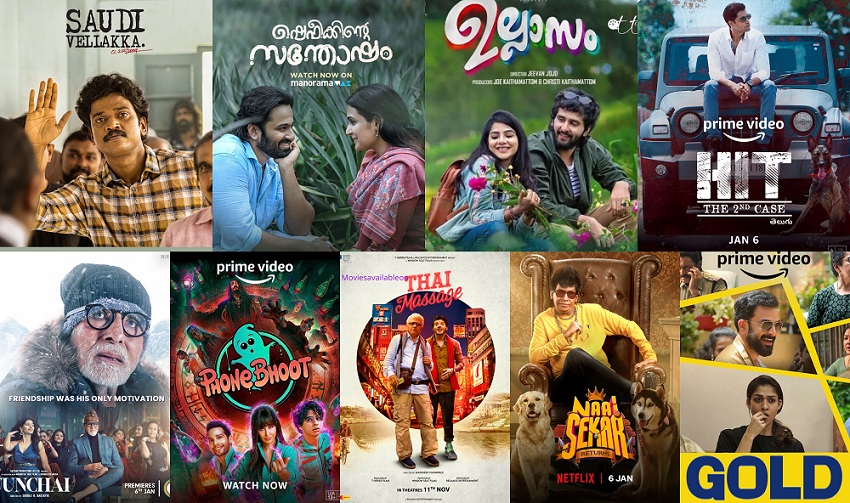 In this first weekend of January 2023 there are 9 OTT Movies released in various OTT platform such as Prime Video, Netflix, Zee5, Sony Liv

Phone Bhoot, starring Katrina Kaif, Ishaan Khatter and Siddhant Chaturvedi is a horror-comedy directed by Gurmmeet Singh. A ghost approaches two ghostbusters with a business idea. But when the ghost reveals her plan, everything goes downhill.

HIT 2 revolves around a cop who tries to eliminate a serial killer. Written and directed by Sailesh Kolanu, it stars Adivi Sesh and Meenakshi Chaudhary in lead roles. The cast includes Bhanu Chander, Rao Ramesh, Posani Krishna Murali, and Tanikella Bharani. Nani had a cameo towards the end.

Prithviraj and Nayanthara starrer GOLD, comedy-drama directed by renowned director Alphonse Puthren, who is known for directing classics like “Premam”. The story unravels between the incidents that take place within four days of Joshi, a mobile shop owner, purchasing a new car owing to a marriage alliance that is almost fixed with Radha.

Popular comedian Valivelu made his comeback into the big screen with director Suraaj's 'Naai Sekar Returns'. The film revolves around a middle-aged man who is expert in kidnapping dogs. But he lands in soup after he locks horns with a dreaded don. How his life changes afterwards forms the rest of the story.

Amitabh Bachchan, Anupam Kher, and Boman Irani star as three aged friends who resolve to visit the Everest base Camp to fulfil the request of their deceased buddy in this family drama film directed by Sooraj Barjatya. Parineeti Chopra, Neena Gupta, Sarika, and Nafisa Ali also star in the film.

Malayalam actor Shane Nigam’s Ullasam, was directed by debutante Jeevan Jojo and the film was touted to be a full-length comedy entertainer with several feel-good elements. Pavithra Lakshmi in female lead. Two youngsters meet during a train journey from Coonoor. The story progresses as the strangers start to know each other and feelings generate between them.

Tharun Moorthy who made an impressive directorial debut with 'Operation Java' is also receiving rave reviews for his latest film Saudi Vellakka. The primary characters in Saudi Vellaka are played by Lukman Avaran, Devi Varma, Binu Pappu, Sujith Shankar and Gokulan. The film is a realistic social drama where the story is told from different perspectives of the characters in the movie. The audience hailed the natural performances of the actors in the movie.

Unni Mukundan starrer Shefeekkinte Santhosham directed by debutant Anoop Pandalam. Unni essays the lead character Shefeek, an NRI hailing from an ordinary family in a small village Paarathodu, finds joy in helping others. The story unfolds with many twists and turns when he returns from Dubai to marry his childhood lover.

Gajraj Rao and Divyenndu-starrer Thai Massage is a quirky family entertainer. Directed by Mangesh Hadawale. The movie sheds light on a 70-year-old man, who suffers from erectile dysfunction and his adventures to overcome it, including a trip to Thailand!