Here's a list of Netflix films that you can watch over this New Year's weekend. 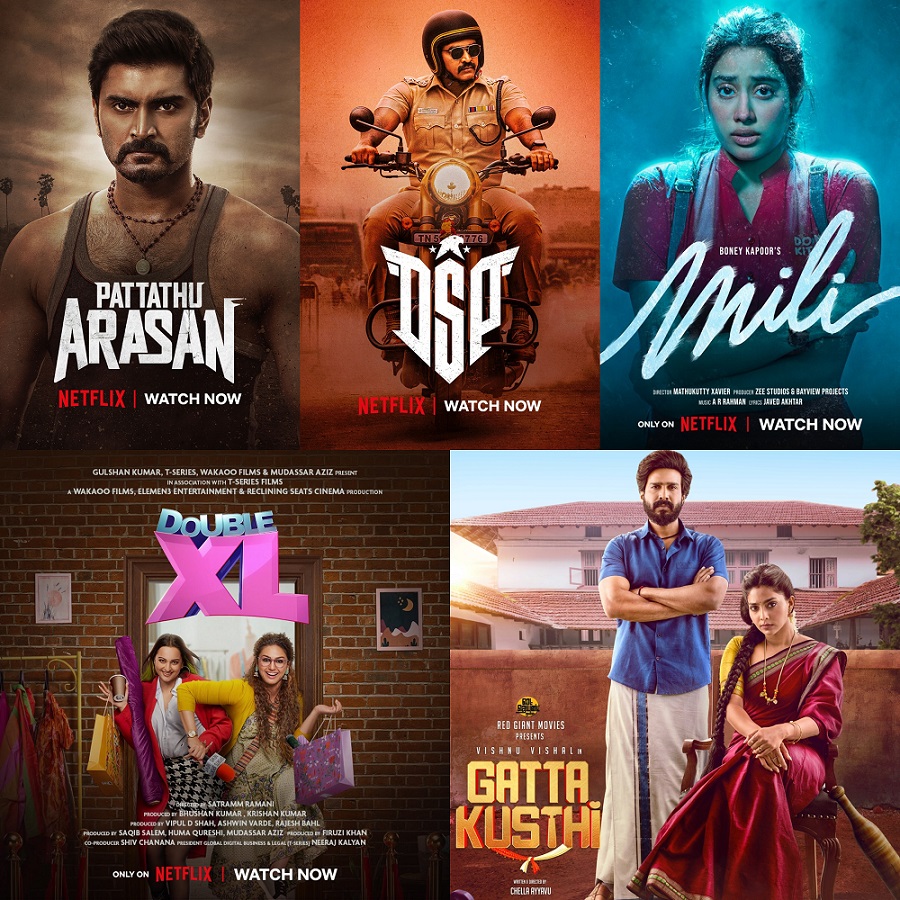 Gatta Kusthi is an Tamil sports drama film written and directed by Chella Ayyavu and was jointly produced by RT Team Works and VV Studioz. The film was also released in Telugu as Matti Kusthi. The plot is set against the backdrop of submission wrestling form Gatta gusthi, which is popular in Kerala. The performances of actors, a few comedy sequences and neatly shot fight scenes are a few attractive aspects of the film. Both Tamil and Telugu audios streaming on Netflix

DSP is a Tamil-language action-comedy movie has been written and directed by Ponram. Vijay Sethupathi and Anukreethy Vas have essayed the pivotal roles in this movie. It revolves around a cop who locks horns with a dreaded goon in Dindigul. How they fight it out forms the rest of the story. The flick also streaming on Sun NXT.

Starring Huma Qureshi and Sonakshi Sinha in the lead roles, Double XL is a Hindi drama was directed by Satram Ramani. It is a comedy-drama that revolves around two plus-size women who face hurdles because of their appearance while working on their dreams. Zaheer Iqbal, Mahat Raghavendra, Indian cricketer Shikhar Dhawan in key roles. This movie marks Indian cricketer Shikhar Dhawan& Mahat Raghavendra’s Bollywood debut.

Atharvaa's latest sport Tamil film Pattathu Arasan, directed by Sarkunam, who has earlier made films like Kalavani, Vaagai Sooda Vaa, and Naiyaandi. Rajkiran, Ashika Ranganath, Radikaa, RK Suresh plays the crucial role. Chinnadurai along with his grandfather, a Kabbadi player, try to bring justice for his brother's death. Can they trace out the real culprits or end up confronting them inside the Kabbadi court?

Janhvi Kapoor starrer Mili is a Hindi survival thriller film and the official Hindi remake of the Malayalam movie Helen 2019. It was produced by Boney Kapoor and directed by Mathukutty Xavier. It also features Sunny Kaushal and Manoj Pahwa in key roles. It follows the titular character Mili Naudiyal, who gets stuck in a freezer and fights to stay alive.