Ratheesh Balakrishnan Poduval’s bittersweet Malayalam film, Android Kunjappan Version 5.25 (2019), which has now been remade in Tamil as Koogle Kuttappa. Tamil version of Koogle Kuttappa directed by debutants Sabari and Saravanan, an erstwhile assistant directors of K.S.Ravikumar. The film to be premiered on OTT platform Aha Tamil from June 3, 2022. 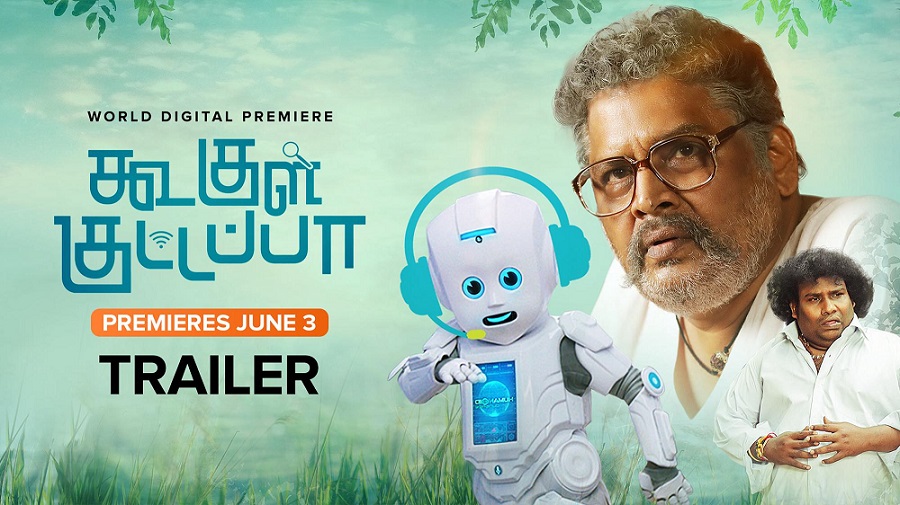 After a long while KS Ravikumar is coming back to silver screen in a full fledged role. Bigg Boss Tamil fame Tharshan and Losliya, along with Yogi Babu, were brought on board to play pivotal roles in the film. The film marks the debut of actor Tharshan on the silver screen, Tharshan will reprise Soubin Shahir’s role from the original while KS Ravikumar will play Suraj Venjaramoodu’s role. Losliya, who plays a Germany-settled Sri Lankan Tamil.

The Plot Revolves around a villager’s son who had to move out of the family. The villager life turns around when an AI humanoid robot enters into their lives and it fills the emptiness which was in their lives.

Koogle Kuttappa bankrolled by Ravikumar's RK Celluloids banner and co-produced by Kallal Global Entertainment. Ghibran composed the soundtrack and background score of the film. Cinematography handled by Arvi and editing done by Praveen Antony. Madhan Karky, Viveka and Arivu have penned lyrics for Koogle Kuttappa which has dance choreography by Sandy and Viji Sathish.

The performance of Ravikumar was appreciated and the romance between Tharshan and Losliya was bland as well. The film was shot in Tenkasi, Kuttralam and nearby locations.