Here are Eight new movies releasing on OTT this week 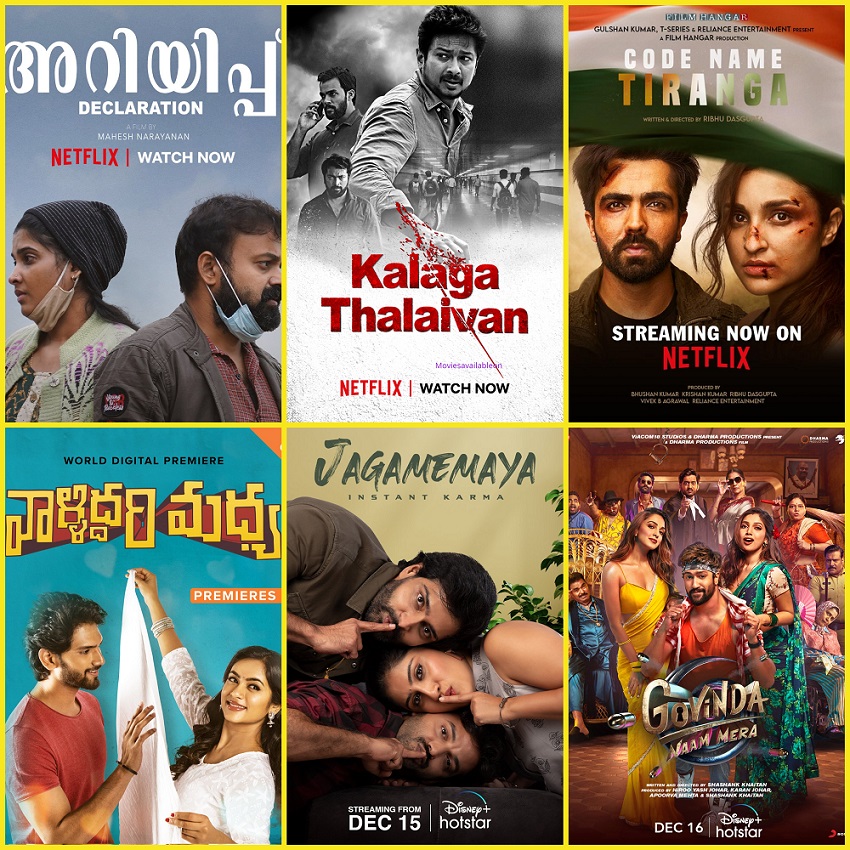 Kalaga Thalaivan is about a heavy vehicle manufacturer, who manipulate to succeed in his business, and how the truth comes out in the open forms the crux of the story. Udhayanidhi plays the role of a worker in a manufacturer, while Niddhi Agerwal plays the leading lady. Arav played the role of a private investigator, who follows a violent way, and he delivered a brilliant performance to steal the show.

Kunchacko Boban and Divya Prabha starrer Social Drama film Ariyippu / Declaration. The movie revolves around a struggling couple in Delhi, who dream to migrate out of the country for a better life. Ariyippu has been receiving accolades on national and international platforms. The movie was selected for the competition section of the 75th edition of the prestigious Locarno Film Festival.

Valliddari Madhya is a love story between a conservative man and a modern woman. Upon meeting an invisible guest from an unexpected place, the story takes you on a fun-filled emotional roller coaster ride. The romantic drama, starring Viraj Ashwin and Neha Krishna.

Parineeti Chopra, Harrdy Sandhu and Sharad Kelkar in pivotal roles. The spy thriller centres on an Indian Intelligence agent who must go to great lengths to protect her country from dangerous elements, even if it means sacrificing her life in the process.

The long-awaited Comedy movie Govinda Naam Mera, starring Vicky Kaushal, Kiara Advani, and Bhumi Pednekar in key roles. The story revolves around Govinda Waghmare who juggles his time between his wife and girlfriend creating a comedy of errors.

Telugu crime thriller Jagame Maya (Instant Karma), starring Dhanya Balakrishna, Chaitanya Rao and Teja Ainampudi in lead roles. The story of the film revolves around a con man who tricks a widow into marriage to make instant money. However, there is a catch he learns his wife’s secret, and his life turns upside down.

2021 Kannada Suspense, Thriller movie 1980 starring Priyanka Upendra in lead role. Set in the 1980s, a novelist Priya, settles down in Appshethalli. As the missing cases increase, Priya must unravel who is going to be the next victim. Will she be able to find the culprit? The film also stars Aravind Rao, Sharanya Shetty, Ramesh Pandith, Shankar Ashwath