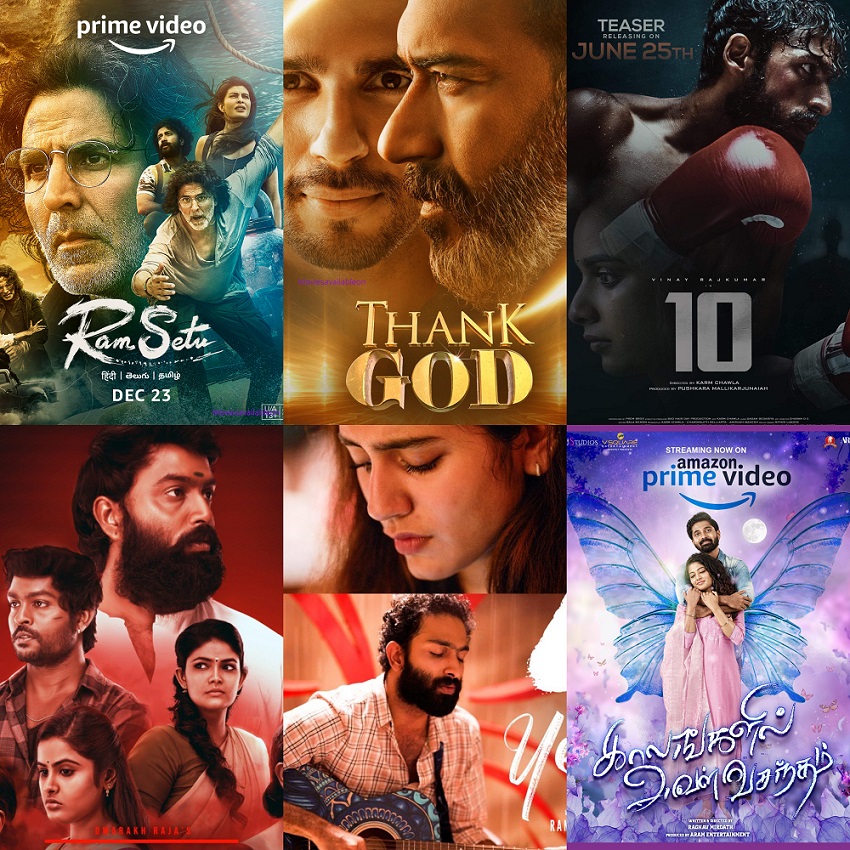 This festival weekend there are 6 OTT movies arrived on digital platform of PRIME VIDEO.

Ajay Devgn is playing the role of ‘Chitragupt’ who plays the ‘game of life’ with Siddharth Malhotra who meets a road accident. Rahul Preet Singh plays Sid’s wife in the movie. The film is about an arrogant real estate broker (Sidharth Malhotra), in huge debt is met with an accident and reaches heaven. To get back to the earth he has to play a ‘Game of Life‘ but there’s a twist.

Abhishek Sharma of Parmanu and Tere Bin Laden fame directed the film. The Leading main character of the movie is Akshay Kumar along with the two female artists i.e.Nushrratt Bharuccha and Jacqueline Fernandez. The story is deeply rooted in Indian culture, history, and heritage. Dr. Aryan Kulshreshta, an archeologist played by Akshay, is set out to check whether the Ram Setu is a myth or a reality.

Kaalangalil Aval Vasantham is a new age romantic drama starring Kaushik Ram, Anjali Nair and Heroshini. The film marks the directorial debut of Raghav Mirdath, along with directing, he also wrote the film. A journey of shyam from cocoon to buttery in search of true love.

Parole is a crime-thriller film, set which in the cut-throat world of jail and outlaws. Written and directed by Dwarakh Raj, who previously made Kadhal Kasakuthaiya (2016). Linga, R. S. Karthik, Kalpika Ganesh and Monisha Murali are main cast of the movie.

Ranjith Sankar's latest campus romance 4 Years. The movie, which has Priya Prakash Varrier and Sarjano Khalid in the lead. The film revolves around the character of Vishal and Gayathri. Their college life, college sunrises, canteen sunsets and hostel midnights.

Vinay Rajkumar’s next, 10 (2022) Kannada Sport Film, which marks the directorial debut of cinematographer Karm Chawla. The young actor play the role of a professional boxer. A commonwealth gold medal winner's boxing career and personal life sees a downslide after failing the dope test. Will he be able to rise again?