It’s Pongal / Sankranti week! The auspicious festival arrives on 15th January this year. The OTT platforms are going all out to woo digital viewers with a delightful bonanza of much-awaited film releases this Pongal / Sankranti. A Action, Crime, Romance and Comedy among others – there’s something for everyone! 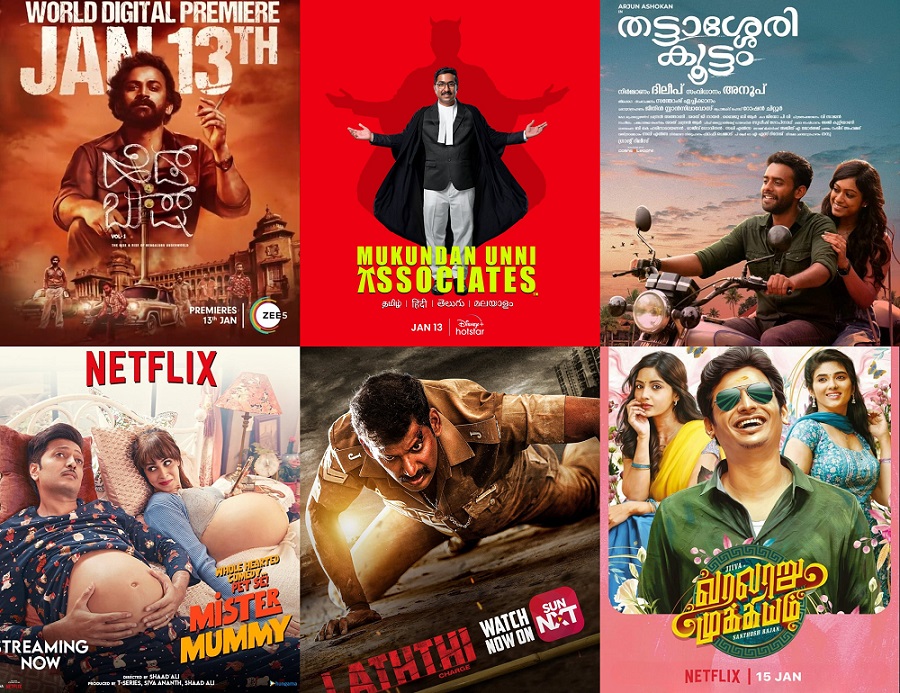 Directed by editor-turned-filmmaker Abhinav Sunder Nayak, Mukundan Unni Associates is a crime, drama with Vineeth Sreenivasan playing the lead role of a narcissistic advocate. The film revolves around an ambitious, young lawyer, who seems to be willing to cross all moral lines to get what he wants.

Directed by Shoonya, Head Bush is a Kannada film starring Dhananjaya and Payal Rajput in the lead roles. The film is all about a Political Crime drama on Bangalore Underworld based on Agni Sridhar’s Autobiography “My Days in the Underworld”.

Thattassery Koottam is a Malayalam comedy-drama directed by Anoop Padmanabhan and stars Arjun Ashokan, Siddique, and Priyamvada Krishnan in key roles. The film also marks actor Dileep's brother Anoop debut in films. Besides starring in the film in a short role, Dileep has also produced the film. The plot follows Sanju, a young man hailing from a traditional goldsmith family. How unfortunate events take over his life when he falls in love with Athira.

Laththi, the Tamil action thriller film, was written and directed by A.Vinoth Kumar in his directorial debut. The film stars Vishal, Sunaina and Prabhu in pivotal roles. A police constable, who gets trapped in a building with his 10-year-old kid, and how they escape from the building surrounded by a group of the enemy.

Mister Mummy is a film about a husband and wife both being pregnant at the same time. It deals with the topic of male pregnancy. Bollywood stars like Genelia D’Souza, Riteish Deshmukh and Mahesh Manjrekar are playing the lead roles in the film. Soorma fame director Shaad Ali was directed the film.

Jiiva, Kashmira Pardeshi and Pragya Nagra starrer rom-com Tamil film was helmed by debutant Santhosh Rajan is a rom-com which revolves around the life of a playboy who falls in love with two women.